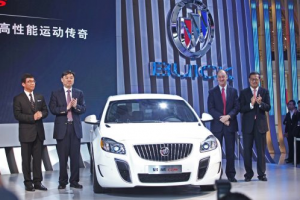 The 2012 Buick Regal GS, known in China as the New Regal GS Sport, is unveiled.

Buick has a long history in China, one going back to the last emperor of China that owned one in his collection.  As automobile sales have skyrocketed in China, Buick’s reputation for quality and safety has led to it being one of the top brands in the country.  Buick has sold over two million cars in China since its arrival, the second million in just three years.

The New Regal GS Sport in China shares many similarities with the Regal GS that will be available in the United States, featuring the same bold styling and a similarly-rated 255-horsepower turbocharged engine.  It also features their FlexRide adaptive driving system, similar to the class-exclusive Interactive Drive Control System that automatically adapts steering, suspension, and transmission settings through at the press of a button to allow the driver to tailor the driving experience.

Columbia drivers will also experience the well-received HiPerStrut suspension system on the Regal GS, currently seen on uplevel models like the Buick LaCrosse and Saab 9-5, which is designed to reduce torque steer under acceleration commonly found in front-wheel-drive performance sedans.

Pricing has not been announced for the 2012 Buick Regal GS sport sedan, but trust that Jim Hudson Buick will carry it as soon as it’s available.