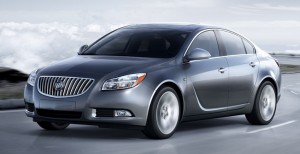 Sales of the 2011 Buick Regal have shot up nationwide.

National sales figured for the new Buick Regal show that it is fast becoming a popular choice in the premium sedan segment, a more than worthy alternative to cars like the Acura TSX, Audi A4, and Volkswagen CC.  Regal has the highest conquest rate of of any Buick thus far this year, with 46 percent of its buyers coming from outside the GM family.  February national sales for the 2011 Buick Regal were up 55 percent compared to January despite a shorter month, an increase attributed to the availability of the 220-horsepower Buick Regal Turbo.  Beyond the additional power offered by the turbocharged 2.0-liter engine, Regal Turbo offers impressive fuel economy with an EPA-estimated 32 highway miles per gallon when equipped with the available six-speed manual transmission.  (Yes, it’s true–a manual transmission in a Buick!)  Sales are expected to increase through the second half of the year thanks to the pending arrivals of the 255-horsepower Buick Regal GS and the 37-MPG Buick Regal with eAssist featuring Buick’s powerful light electrification technology and exclusive aerodynamic tweaks to improve fuel economy even further.

Jim Hudson Buick is the oldest Buick dealership in Columbia, South Carolina, and carries a great selection of 2011 and 2012 Buick Regal models.  Jim Hudson was among the very first in the United States to receive the new Buick Regal, and will be among the first to receive the new GS and eAssist models once they begin production.  Jim Hudson prides itself on complete customer satisfaction before, during, and after the sale, a commitment noted by the public voting Jim Hudson Best New Car Dealership an unmatched ten years in a row in The State’s annual Readers’ Choice poll.  For more information on the 2011 Buick Regal, visit the Buick Regal Columbia SC page on Jim Hudson’s website, or visit them at 7201 Garners Ferry Road in Columbia to test-drive a Regal of your own.