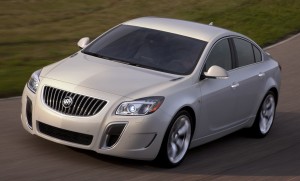 Jim Hudson Buick is pleased to announce the new updates coming to the Buick Regal as it enters its second model year.  The 2012 Buick Regal gains two new models along with a host of tweaks to make it an even better choice compared to competitors including the Acura TSX, Audi A4, and Volkswagen CC.

Perhaps the most anticipated addition to the Buick Regal lineup is the Buick Regal GS, the return of a performance sedan to the Buick lineup.  Featuring a 255-horsepower turbocharged four-cylinder engine, a standard six-speed manual transmission, standard Interactive Drive Control System that lets the suspension go from standard settings to both Sport and GS modes for a more sporting feel when the driver desires it.  Special HiPerStrut front suspension borrowed from the larger Buick LaCrosse sedan reduces torque steer, while standard 19-inch (and available 20-inch) alloy wheels with the choice of all-season or performance tires lend an aggressive look to complement the unique front and rear fascia.

Across the rest of the 2012 Buick Regal lineup, the packaging and trim options have been greatly simplified to increase the odds that the Buick Regal that Columbia car shoppers prefer will be available in stock for immediate delivery.  From 13 packages in 2011, Buick now offers just five including the GS:

2012 Buick Regal models with the Base, Premium 1, and Premium 2 packages are available with the highly-anticipated eAssist system of fuel-saving technologies.  The 2012 Buick Regal eAssist features an onboard electric motor that allows the engine to cut on and off effortlessly combined with special aluminum wheels and tires as well as aerodynamic upgrades. While costing significantly less than a full-scale hybrid vehicle, eAssist allows fuel economy improvements of up to 25 percent compared to the standard 2.4L Ecotec engine, with Buick estimating highway fuel economy around 37 miles per gallon.

Jim Hudson Buick eagerly awaits the arrival of the 2012 Buick Regal, which will arrive later this year to its showroom in Columbia, South Carolina.  Jim Hudson is the #1 Buick dealership in South Carolina, and carries a great selection of Buick Regal models to choose from.  Jim Hudson has been voted Best New Car Dealership in Columbia SC an unmatched ten years in a row and counting, which only underscores Jim Hudson’s commitment to complete customer satisfaction.  For more information, visit our Buick Regal Columbia SC website or call (888) 377-4971.