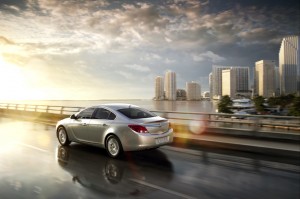 The 2013 Buick Regal with standard eAssist will achieve an EPA-estimated 36 MPG highway.

Buick has announced that the 2013 Buick Regal luxury sedan will receive the eAssist suite of fuel-saving technologies as standard equipment.  eAssist, available today on the 2012 Buick Regal, mates an electric motor and battery pack with the Regal’s 2.4-liter four-cylinder engine to capture and supply energy otherwise lost when braking and decelerating.  It also incorporates new aerodynamic improvements designed to reduce drag, combining for an improvement of around 25 percent to Regal’s gas mileage.

eAssist became standard equipment on the Buick LaCrosse in Columbia SC for the 2012 model year, where it provides a near-full-size sedan with impressive EPA-estimated fuel economy of 25 MPG city and 36 MPG highway.  LaCrosse with eAssist has seen exceptional sales during its first year on the market, outselling the Lincoln MKZ Hybrid by 3-to-1 and the Lexus HS250h by 5-to-1 in January according to Hybridcars.com.  With eAssist’s addition to Regal’s already-impressive list of standard equipment (including heated leather seats, dual-zone climate control, Bluetooth, USB, and so much more) in lieu of the base 2.4-liter trim level, it should make the Regal an even more compelling option for buyers looking at premium sedans.

Columbia car shoppers shouldn’t write off the Buick Regal as a car that’s gone soft for green cred, though.  Regal’s optional 2.0-liter turbocharged engine remains an option for 2013 mated to a six-speed automatic transmission or a six-speed manual transmission.  Also returning for 2013 is the Buick Regal GS, which features a 270-horsepower turbocharged four-cylinder engine, Interactive Drive Control with the model-exclusive GS mode for tighter handling, Brembo front brakes, and Buick’s innovative HiPer Strut front suspension designed to reduce or eliminate torque steer found on other high-performance front-wheel drive cars.  All Regal models draw their origins in a platform developed by some of Europe’s finest engineers on its most demanding roads.  With sharp handling and Buick’s world-renowned luxury, it’s a package that’s hard to beat.

Jim Hudson Buick is the oldest Buick dealer in Columbia SC, having served the Columbia area for many years with a focus on complete customer satisfaction.  Jim Hudson has been voted Best New Car Dealership by readers of The State an unmatched eleven years in a row and counting, and carries and services a full line of Buick models including the Buick Regal and Regal GS.  Jim Hudson Buick is located at 7201 Garners Ferry Road in Columbia SC and can be reached by phone at (888) 377-4971.